Notes from the Rann

0shares
The dusty, bumpy road from Morbi gives way to smooth tarmac at Halvad and our GSRTC bus soon pulls in to the dusty town of Dhrangadhra. The princely state it once ruled commanded a 13 gun salute. Today it is just one of those blink and you miss places. Not for us though – we are here to explore the Little Rann of Kutch and a sturdy Mahindra Commander Jeep waits for us outside the bus stand. The driver, Hajibhai soon has us speeding along the bumpy country road – our stomachs are grumbling in the late afternoon.
Keekar, Babool and other shrubs of the arid desert country dot the landscape and all of a sudden give way to a lush green patch watered by Narmada canal. It is dry once again as we pull in to Jogad village, where our host – the affable Devjibhai Dhamecha awaits. Photographer, Naturalist, Tour Operator and All round good guy, Devjibhai is an authority on the salty desert known as the Rann of Kutch. His little property, the Eco Tours Camp is the perfect launchpad for forays into the Rann.
But first thing first – lunch! While we check into our spartan, but comfortable ‘Kooba‘ huts, a simply homely meal is laid out. Over the meal Devjibhai briefs us about the surrounding landscape, wildlife and salt trade which is the chief economic activity in these parts. Within a few minutes it is clear that all the stories that we had heard about the man are more than true.
Later in the evening, we head out to a nearby watering hole where local wildlife comes to drink around sunset. The hour long wait results in nothing. We cross the road and head towards a thicket where we suspect our luck will change.And it does – I climb a mound of salt and immediately catch a glimpse of our elusive quarry. But the flash of brown and white disappears in the bushes and light fails soon.
Next morning we’re up early and a quick chai later we are motoring along the salt flats. It isn’t long before we come face to face with a herd of Khur –  the animal we’ve come this far too see. A species of wild ass, the Khur is critically endangered and the Rann of Kutch is the last place on earth where these beautiful animals can be seen. Loss of habitat and encroachment of their range by humans and domesticated cattle have seen their number dwindle to a few thousand. 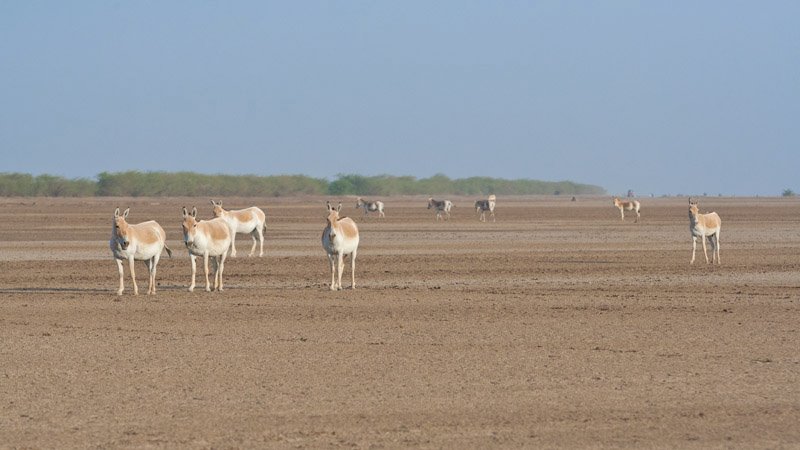 A little further, we come across another bunch of Khur – waiting out on the salt flats. Occupying their grazing ground is a herd of domesticated cattle. Even in their last refuge – a so called protected sanctuary they are being squeezed out slowly. The locals can’t help it either – strong winds remove the fertile top soil and seawater intrusion during the rains leaves the soil and water saline. Denudation of natural vegetation means that very little land is left for agriculture and grazing. And it is the humans and their flock that win the battle invariably. 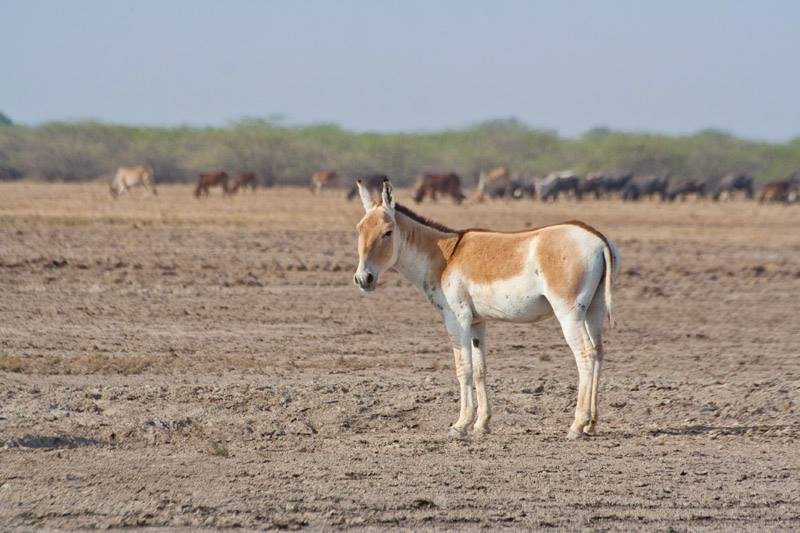 We come across the incredible sight of a marooned boat in the middle of the desert. Devijibhai tells us that the seawater intrusion in the monsoon provides another opportunity to the locals to supplement their livelihoods. The water is seeded with marine life which thrives during the rains and then later farmed. Shrimps and small fish are the chief catch. The forest department discourages this shrimping but the vast tracts of the Rann are simply too big for it to police. 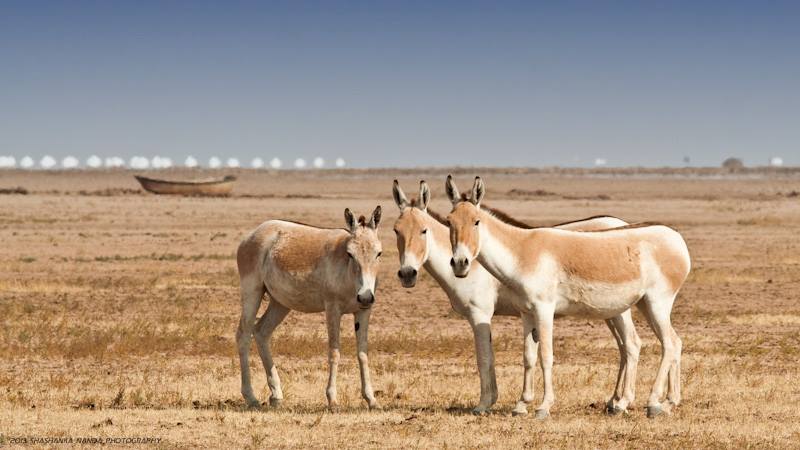 The biggest threat however is the mushrooming of the salt pans in the Rann. The salt contractors increasingly encroach on the scant grassland leading to the disturbance of wildlife. The Great Indian Bustard was once found aplenty here, but Devjibhai confirms that it is rarely seen now. A few friends of mine had toured these parts looking for the and they too returned empty handed.

With little or no income from agriculture and increasing competition from cheap, migrant labour the local populace falls easy prey to the salt companies. Overworked, exploited and underpaid – the salt pan workers toil in the blazing sun for meagre returns. 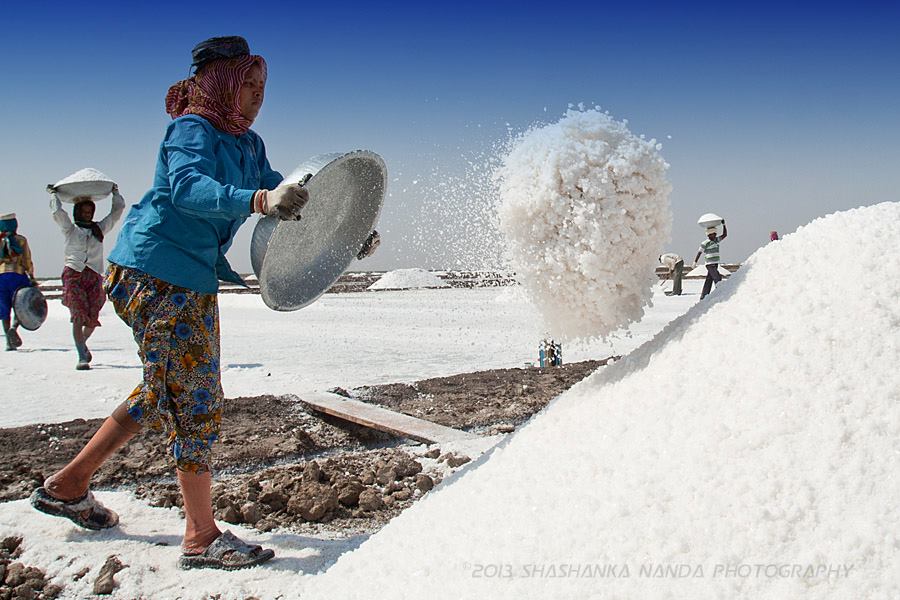 In a cruel twist of fate, the little agriculture that survives is now under threat from the Khur themselves. Under pressure from man and cattle, incidents of Khur attacking standing crops in search of food are increasing. The locals for the moment are content with shooing the wild animals away, but one wonders how long before the first shot is fired or the first wild ass is poisoned?

With these questions, we step on to what is known as the White Rann – the pristine salt covered flatland that isfeatures on virtually every tourist brochure or postcard on these parts. It is a vista straight out of Star Wars – Tattooine is what comes to mind.

It is the beginning of the dry season – and soil under the salt is still soft. The first foray by a vehicle into these parts was only made the previous day – a forest department Jeep drove all the way to a nearby ‘Bet’ or island to set up a watchtower. The Bets are nothing but patches of high ground that are marooned in the monsoon and repopulated in the dry weather. We towards one, but our Jeep gets bogged down in the mush. It takes all of the engine’s the 72 horse power and the strength of three men to push it out. We return, but the sight of three clay figurines alone in the emptyRann remain with me. As the sun sets, the Khur return to the sanctuary of the bushes – they will venture out again in the night. An uneasy calm prevails in the Jeep.

Gazillions of crickets shatter the quiet of the night. Under a starry blanket we wonder about the future of this unique but increasingly fragile Eden. A shooting star wheels overhead. Our wish is not a secret

Useful Info on Little Rann of Kutch
Location – Kutch District, Gujarat – India
Access – Nearest major town is Ahmedabad. From there, take SH7 towards West and leave the highway 125km later at Dhrangadhra to turn North towards Jogad village (for Devjibhai’s Eco Tours Camp).
Stay – Eco Tours Camp – Phone:- +91-2754 280560 / +91 – 98255-48090 Email : ecotourcamp@gmail.com Tariff – Rs. 2000 per night per couple (please check for current rates) –  meals included. Other options in the area include Rann Riders and Desert Coursers.
Eat / Drink – Outside of the resorts, very little is available to drink / eat in the villages. It is best to stock up supplies in the major towns.
Other Tips – October to January is the best time to visit. The birds including flamingoes are in full force. The light is good and so is the weather.A long lens and binoculars are advised as is copious amount of mosquito repellant.